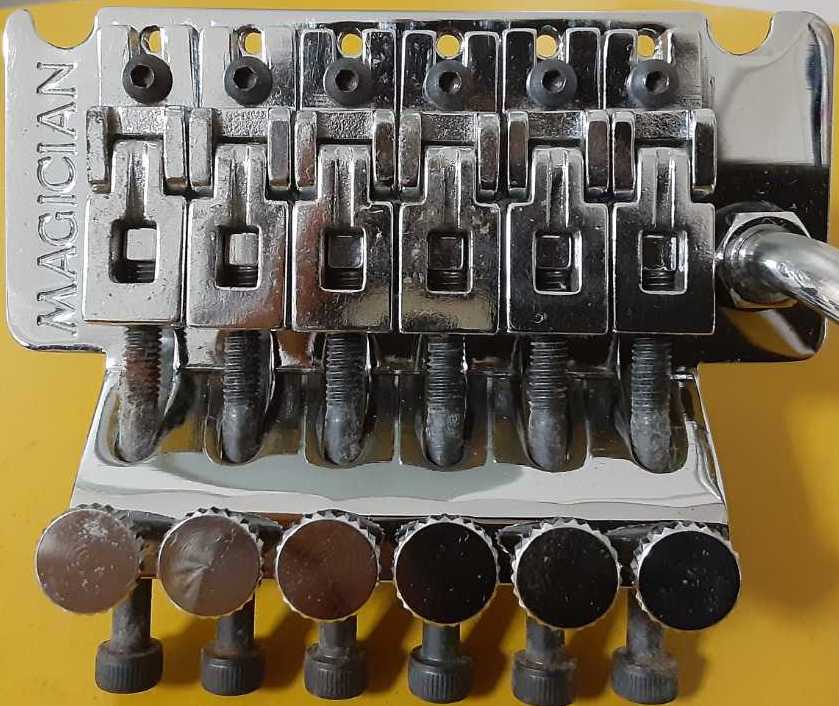 The ESP Magician is the first “original” FRT-5 style copy ever made and is seen in catalogs as early as May 1983, around the same time Eddie Van Halen is seen with the APM whale tail during the U.S. Festival.  Hence, this is a very early FRT-5 clone and why it’s assumed to be the first.  The magician only seemed to last 3-4 months in production. 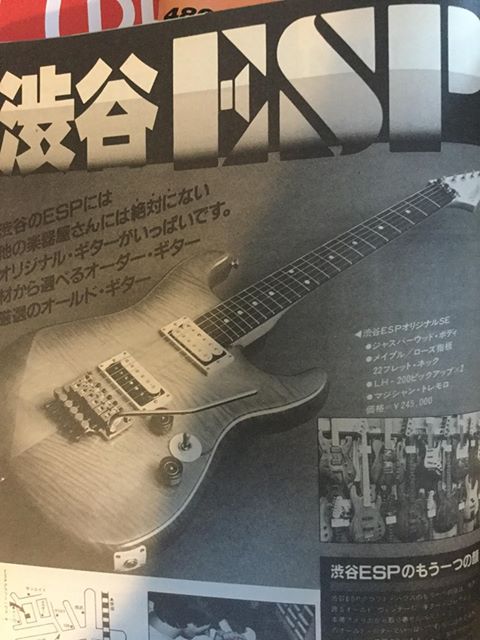 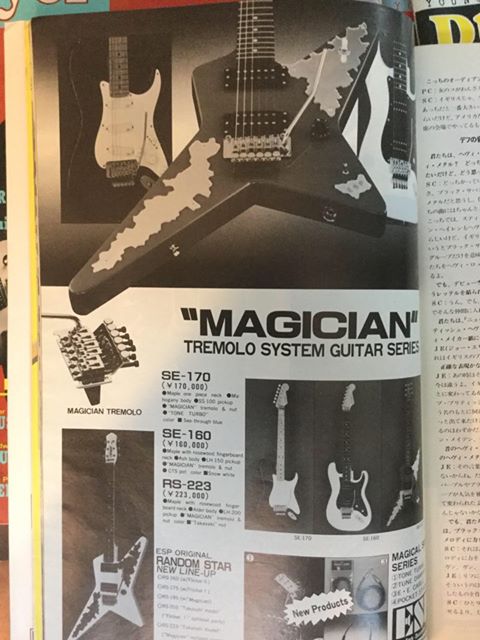 The ESP Magician tremolo is first seen in the 1983 August ESP catalog (left) and the September 1983 catalog (right).  It was around this time that Floyd Rose was making their “original” FRT-5 tremolo for Kramer during this time, as the deal was recently struck.  The FRT-5 whale tail design was recently invented in late 1982/early 1983, and therefore, the Magician bridge may be the first copy/licensed version (“licensing” the Floyd Rose didn’t technically exist until a few years later, which is why I’m calling them “clones.”) 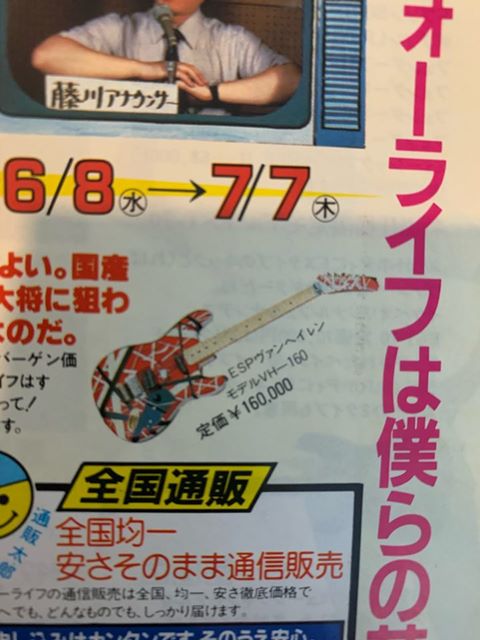 Fourlife ad listing ESP Van Halen model – seems like it has the FRT-5 Magician.  In Young Guitar magazine – July 1983.  The Magician most likely was in stores by early June 1983. 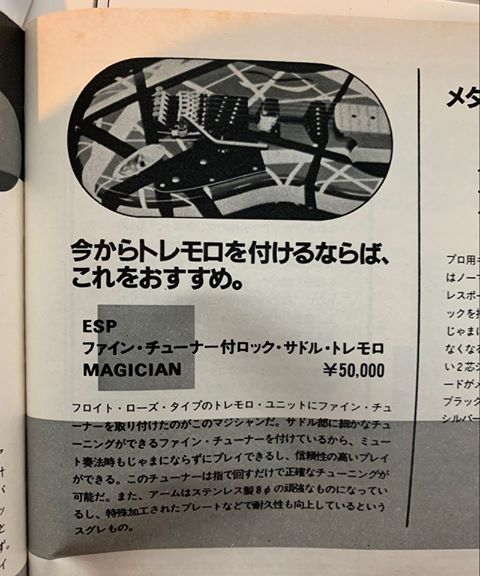 Translation from the “something new” section in the same magazine as above:  “If you want to add a tremolo, I recommend this. Pro = ESP Fine tuner lock saddle tremolo MAGICIAN ¥50,000 This magician has a Freund rose type tremolo unit with a fine tuner. Since the saddle is equipped with a fine tuner that can be finely tuned, you can play without disturbing when playing mute, and you can play with high reliability. This tuner can be tuned in place by simply turning it with your finger. In addition, the arm is made of stainless steel and has a robust diameter of 8φ, and the specially processed plate has improved durability.” 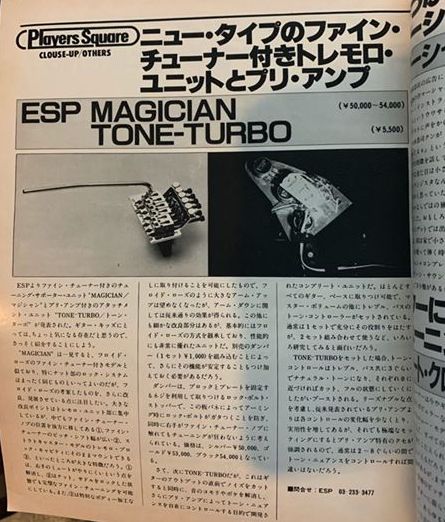 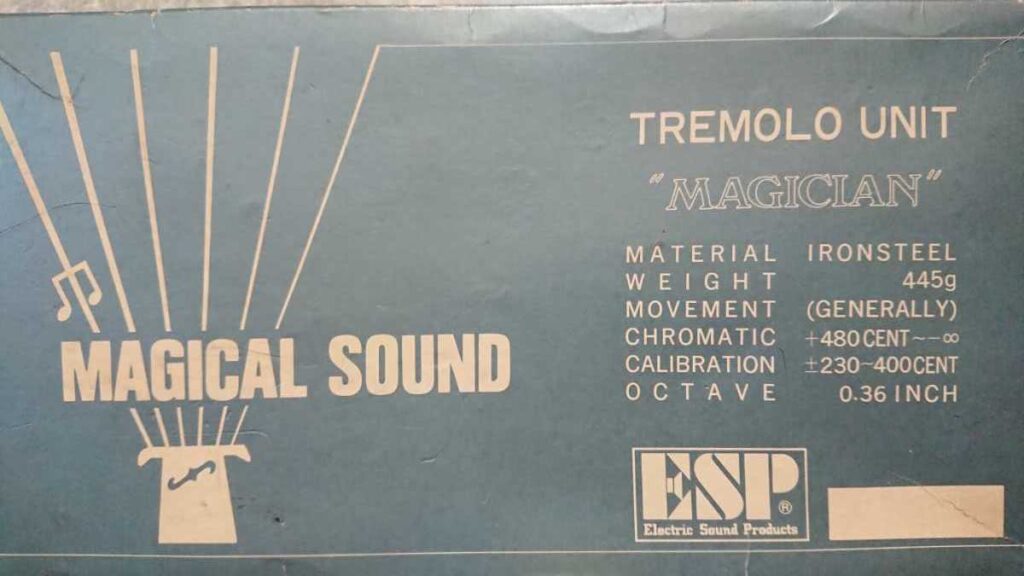 Above is a rare Magician box which the tremolo came in if buying separately. 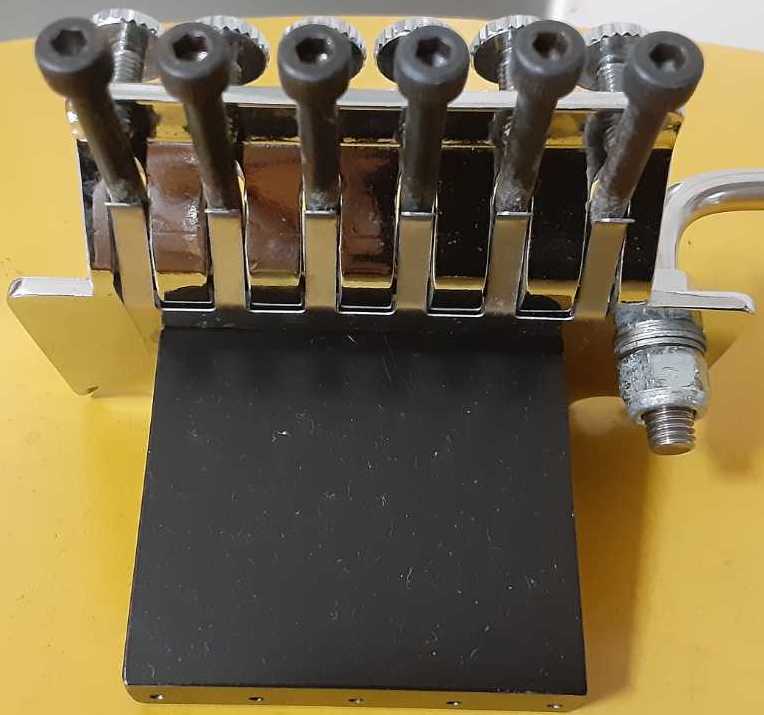 The Magician is made of bent-steel, much like the APM whale tail.  However, they seem to be built differently. The Magician had a hefty price tag of 50,000 yen back in 1983. 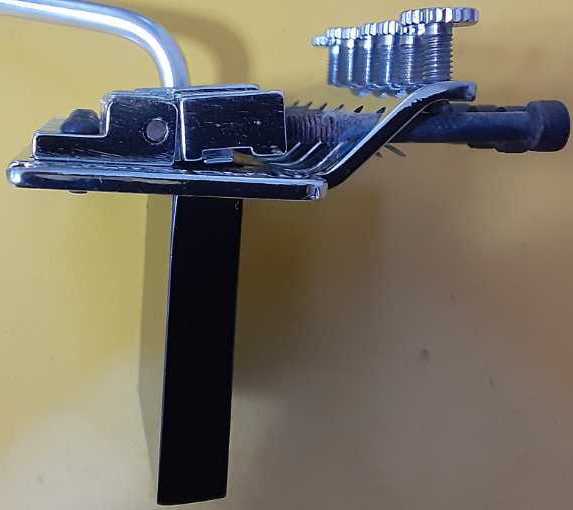 You can see the mill marks on the saddles.  The thinner slanted steel block is seen on other early Floyd Rose models, such as the FRT-1 and some FRT-7s.  The same Japanese factory that made the Fernandes Floyds may have also made these early ESP Magicians.  No one knows for sure. 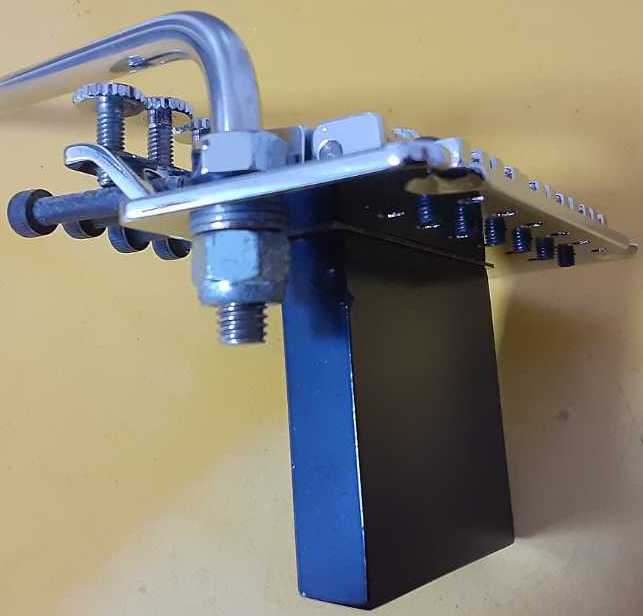 This Magician features an early nut/washer tremolo mechanism seen on the earliest official Floyds during the era. 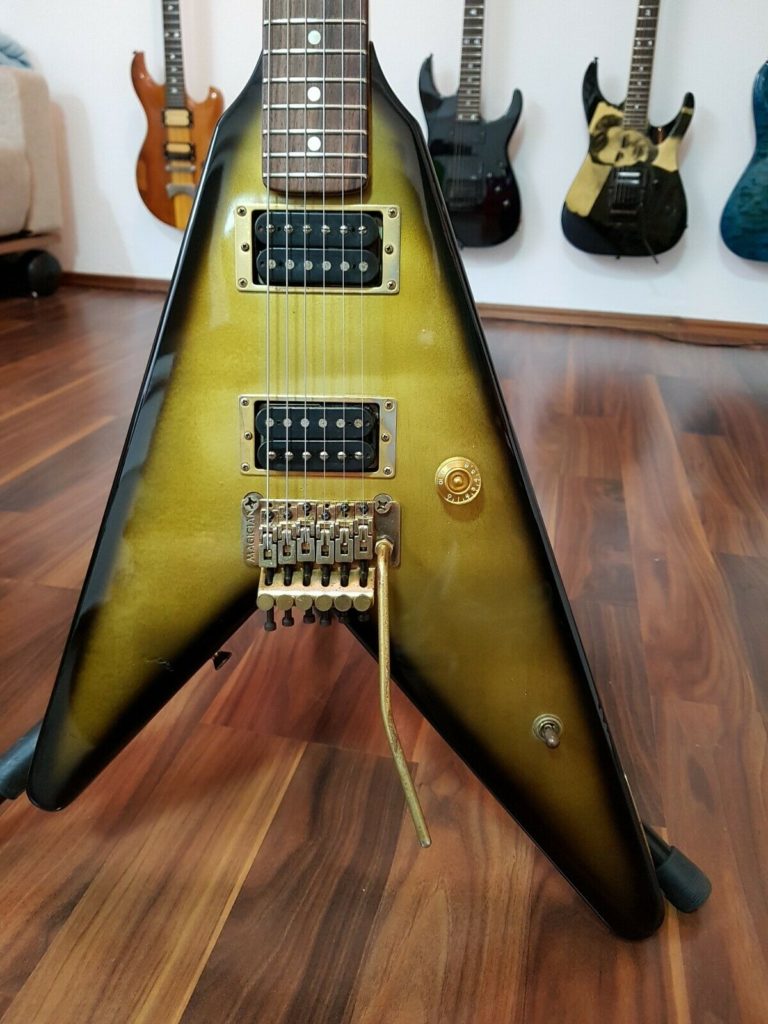 Above you see a very rare gold Magician. 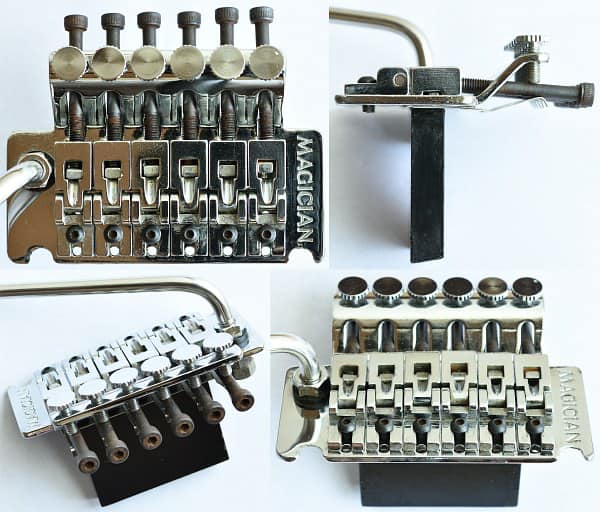 Above you see a Magician with rare bullet style saddles similar to the APM whale tail.  Hence, it’s possible that a metal factory in Japan created these style saddles for most early FRT-5 designs. 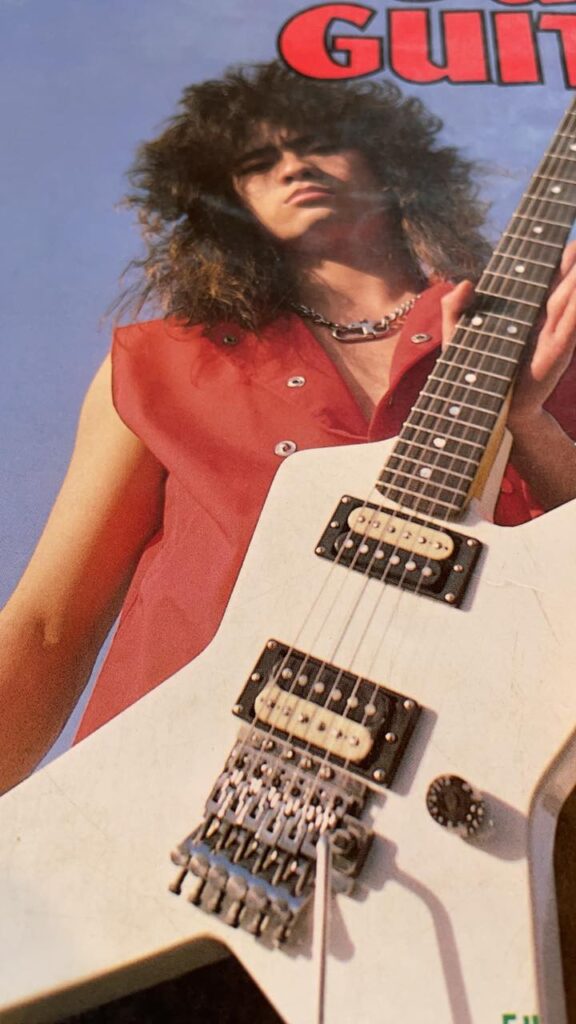 Above is Akira Takasaki, a Japanese guitarist, with an interesting tremolo that mixes a Magician with an ESP Flicker.