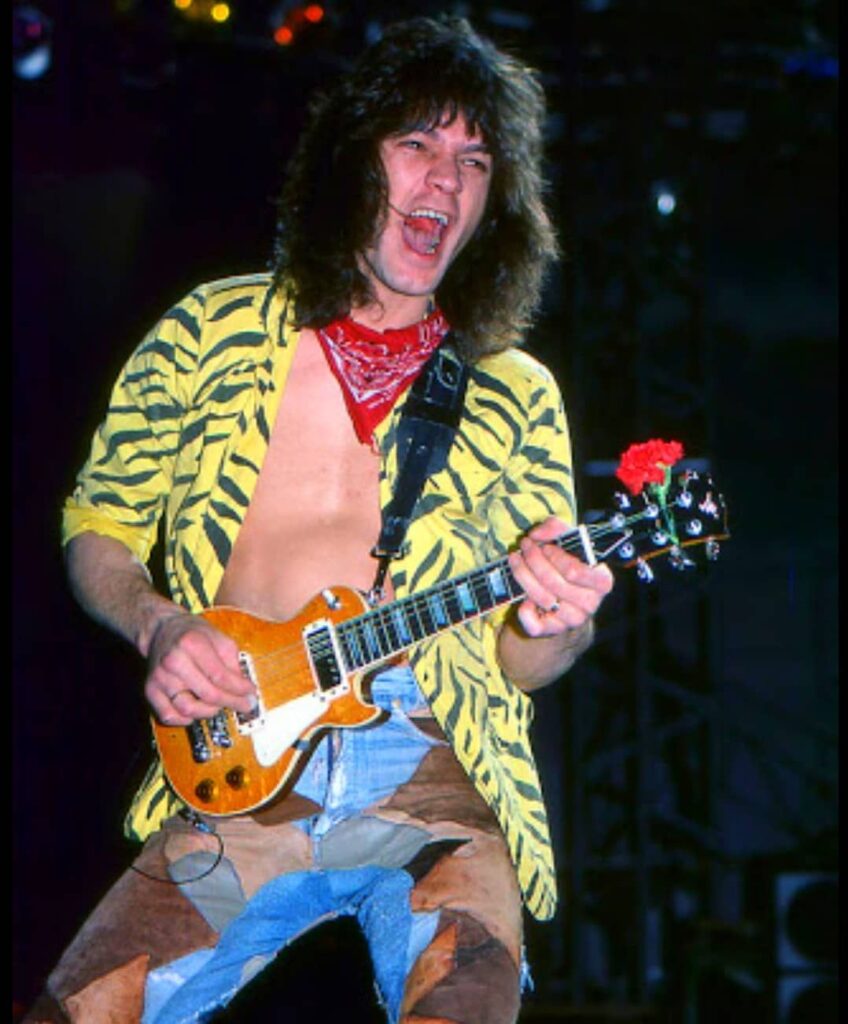 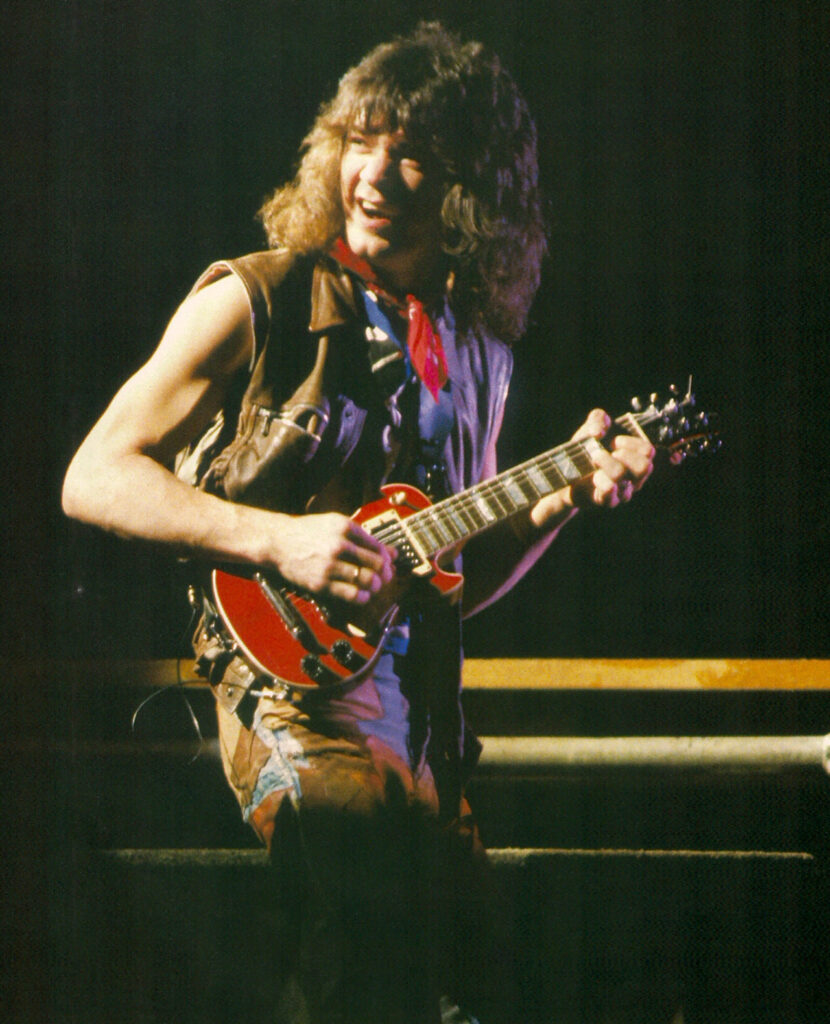 Above are photos of Ed with his mini Les Pauls built by David.  David is currently reissuing the mini LP. 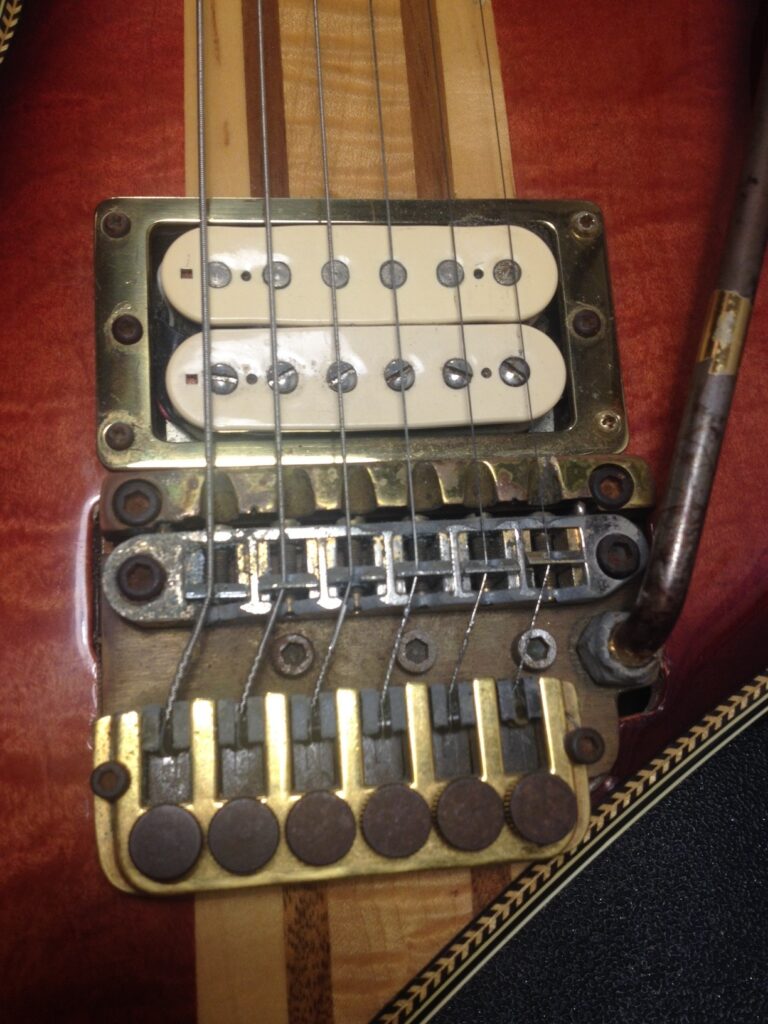 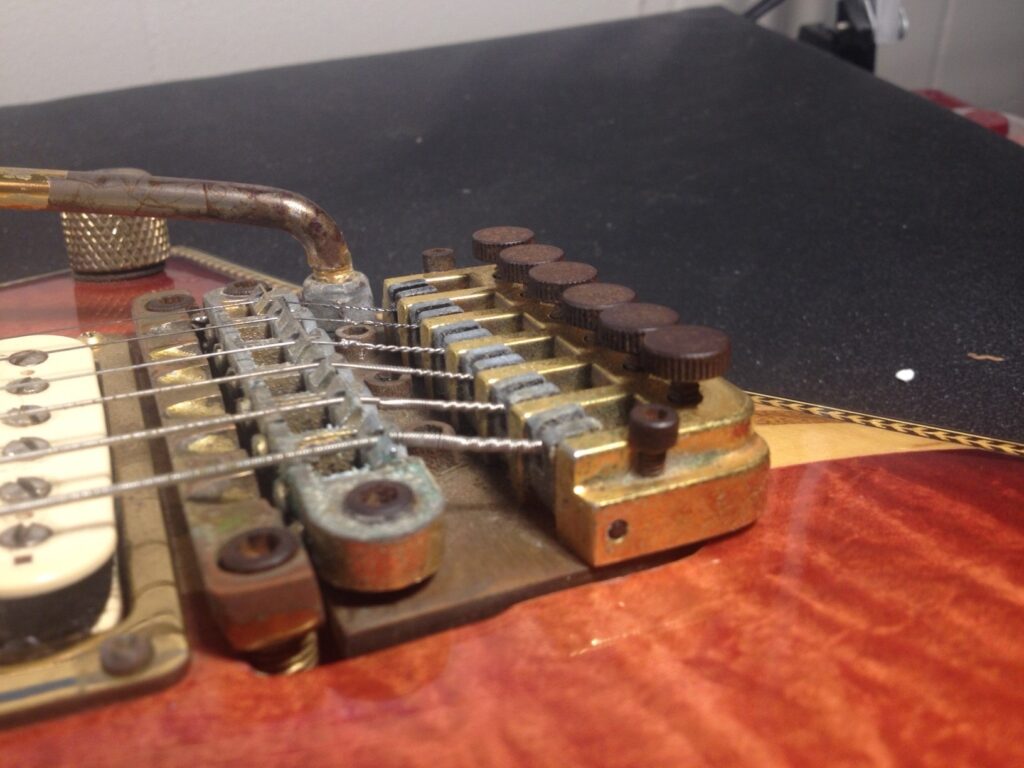 Above is possibly the first-ever fine tuning tremolo, predating the Rockinger and FRT-4.  This is the exact same style of bridge David Petschulat, former Kahler employee and creator of Eddie Van Halen’s “Mini Les Paul,” created for Eddie Van Halen.

David has also sold those vibratos to Paul Dean of Loverboy, Mick Jones of Foreigner, Johnny Graham of Earth Wind & Fire, Gordon Kennedy in Nashville – maybe a couple others.

Here is the story in David’s own words:

“I made Eddie’s first locking vibrato with fine tuners and sold it to him August 30, 1981 in the green room at the Municipal Auditorium in Nashville.  I’d hunted him down in vacant downtown Nashville (it was Sunday everything closed) and pitched him my mini Less Paul guitar – he loved it on the spot and we went to the auditorium to follow through on the sales etc.

There in green room he contracted a second guitar – the wine red mini – and tried on and tested my wild lightening bolt guitar which had my vibrato on it. He didn’t so much like the lightening bolt but liked the fine tuners.  He told me Floyd had been intending to make him one with fine tuners, but Floyd had been in a car wreck and badly hurt his back and had done nothing for months.  Ed asked me to make one, and he gave me one of his own older Floyds at my suggestion so that I could make it faster and easier and we’d know it would fit on his guitars.

I took it and reworked it – which was REALLY difficult since Floyds are very hard on the rockwell scale – really hard.  I sent it to him in March of 1982.  I then wrote out a business plan and asked him to back me perfecting the design and the two of us getting it manufactured by a company.  I did that all on notebook paper, hand written.  It was very high-school kid looking.  I got no reply. When I finally called his office to ask if he got the business plan, his staffer, Karen Valdez, asked me if I knew that the band had written a song using my mini Les Paul(s) – I said no – she said they even named the song Little Guitars.  That was pretty cool. Yet I was flustered about him not following up on the vibrato potential..

I print up business cards and decide to pursue it myself – I go to the NAMM show in Atlanta since it’s 4 hour drive – I go to Allparts. No interest. WD Pickups and parts. No interest. A buddy tells me I better go to Kramer. I walked up and started to boil inside (and maybe a little outside).  I look at a big poster of Ed holding a Kramer with some vibrato on it. Dennis Berardi walks up and starts to tell me with pride what they’ve done.  I say something like “I find this all very interesting” no doubt with steam coming from ears.  Ed walks up and says “aw, Dave, it’s not what you think.”  He’d been approached by Rockinger, I presume through Kramer/Dennis.

With much hindsight it doesn’t bug me – I get it real well – Floyd’s recovering from accident, I’m a kid with a crude but working idea, Rockinger has a full-fledged product ready to sell – so that’s what they went with. Out of all of that, Floyd had the best design, hands down, but I like knowing I was a few months ahead of him in the early running.  If patent law then was what it is now, I’d have gotten the document – but back then it was who invented first, not who applied first.  And according to a napkin signed by a girlfriend, he edged me out of that possibility.”